You are here: Home / Lead story / Promenades and pleasure walking in the footsteps of Jane Austen

I do not want people to be very agreeable, as it saves me the trouble of having to like them

Promenades and pleasure walking in the footsteps of Jane Austen  – One wonders what Jane Austen would make of the army of Janeites – the term adopted by Austen devotees – who will be on the march to commemorate the 200th anniversary year of her death this year.

Her rather snooty and, you would hope, adolescent comment about people (top), certainly didn’t translate into her books. They represent some of the best loved English novels ever and have been on literature’s best seller list since they were published.

Throughout 2017 we will be shining a spotlight on Jane Austen, one of England’s literary greats, as events are held in her birthplace of Hampshire and across the country.

From a book bench sculpture trail to an exhibition at The British Library or simply taking in one of the many landmarks that have featured in adaptations of her books, VisitEngland has compiled a round-up of what you can expect on an Austen trail around the country.

As Jane’s birthplace and final resting place, Hampshire will be a major focal point for the Jane Austen 200 commemorations and events.

Start your trip at Jane Austen’s House Museum (her former home) and Chawton House Library in the village of Chawton. Between March and December highlights will include an Open Gardens weekend (10-11 June) and a Regency Week festival (17-25 June), held in and around the market town of Alton and Chawton.

A highlight of the celebrations will be Hampshire Cultural Trust’s The Mysterious Miss Austen exhibition in Winchester (13 May – 24 July) with special and unique Jane Austen pieces, including loans from the National Portrait Gallery, British Library and private collections.

Winchester Cathedral, where Jane is buried, will be running ‘Tours and Tea’ (monthly from February – November) exploring Jane’s life.

Visitors to the area can even sleep at a location visited by the author with a stay at Oakley Hall Hotel, Steventon, a luxury 50 bedroom hotel (bed and breakfast from £134 per night), which Jane visited frequently in its guise as Oakley Hall. Or enjoy a novel escape at Tylney Hall, which is offering a special anniversary package from March 2017 for £120 per person per night including breakfast, afternoon tea and entry to the Jane Austen House museum. www.janeausten200.co.uk www.visit-hampshire.co.uk/

The South West Spa city of Bath is a great place to get to know Jane Austen, where she lived between 1801 and 1806. The city’s perfectly preserved Georgian architecture remains unchanged from the streets depicted in Northanger Abbey and Persuasion.

Visitors can step back in time with a free downloadable audio walking tour of the city ‘In the footsteps of Jane Austen’, that includes extracts from her novels and letters and brilliantly describe Bath as it would have been in its Georgian heyday. Be sure to stop off at the Jane Austen Centre, located in a Georgian town house just a few doors down from where she once lived.

Those wanting to truly follow in her footsteps should bed down at Jane Austen’s Residence at 4 Sydney Place. The author’s former home is now four luxury apartments, each sleeping 2-4 guests and named after an Austen character (join the queue for Mr Darcy’s second floor apartment). The entire house can be rented exclusively for up to 14. Extra touches such as free breakfast, Jane Austen tea and Cowshed bathing products make it a great home from home in the city. Apartments cost from £179 per night for a midweek stay.

Between 9-18 September you are invited to join the largest gathering of Jane Austen enthusiasts at the Jane Austen Festival. Previous years have seen fans donning full regency garb at the Grand Regency Costumed Promenade. Tickets on sale from February onwards. www.visitbath.co.uk

Jane is known to have visited and loved Lyme Regis from letters to her sister Cassandra where she described walking on the Cobb and her last novel Persuasion was set in the Dorset seaside town. Literary Lyme offers a wealth of guided walking tours of Lyme Regis and the Jurassic Coast to follow in the footsteps of authors who chose to visit and live there and its use as a setting in novels and films.

Many of Jane Austen’s characters spent time ‘in town’ so it is fitting that London’s British Library will honour the author with her teenage writings reunited for the first time in 40 years at a brand new exhibition Jane Austen Among Family and Friends that runs until February 19.

The Austen family had many links to Kent and Jane’s father was born, attended school and later taught in Tonbridge where a Jane Austen Walk and audio tour can be taken around the town. The author travelled often within the region stopping off in Dartford and a regular guest at Godmersham Park near Ashford, where her brother Edward lived.

Kent is home to a number of locations for well-known film and TV adaptations of her books. The Jane Austen Movie Trail on the live Kent movie map highlights locations from the BBC adaptation of Emma. The Keira Knightley big screen adaptation of Pride and Prejudice also found its home in Kent with Groombridge Place in Tunbridge Wells providing the perfect visualisation of the Bennet’s family home.

In Derbyshire and the Peak District

Quoted by Austen herself as there being ‘no finer county in England than Derbyshire’, it is fitting that the region has featured widely in Jane

The Keira Knightley film production of Pride and Prejudice features the 18th-century landscaped garden, Stourhead, and one of its enchanting temples. Lacock, a wonderfully preserved village dating from the 13th century, played the village of Meryton in the BBC’s Pride and Prejudice. www.visitwiltshire.co.uk

A turbulent start to 2020 for travel industry – So far, it’s been a very bumpy ride for the travel industry this year. And all the signs point to further tourism turbulence over the next few months as the fallout from the coronavirus continues to unfold. Shall we book or shall we wait – that‘s […]

Cycling Europe the e-asy way – Explore has the perfect e-bike cycling trips for those worried about punishing uphill climbs and sore legs. Boost your peddle power while still enjoying the incredible scenery on our most exciting cycling trips, from circumnavigating Mount Etna to cycling through vineyards in the Douro Valley. Cycling the Baltic States […]

Saving finest view at Blenheim Palace – A massive civil engineering project to help save the ‘finest view in England’ is set to get under way at Blenheim Palace later this year. The multi-million pound project will see more than 300,000 cubic metres of silt – enough to fill Wembley Stadium – removed from the […]

Culture calls from Dresden – After seven years of part-closure and extensive renovation work, Dresden’s Old Masters Picture Gallery will officially reopen to visitors on February 29 – including a special late-night opening on February 28 and free admission until 1 March. Located in the Semper building gallery wing of Dresden’s Zwinger Palace, the Old […]

For those of us who prefer the DIY approach to travelling – that’s Design it Yourself – good, accurate and reliable information is worth its weight in gold.

Our editorial columns already offer ideas and inspiration for the travelling public and Exploring More Recommended goes one step further, helping you to plan ahead with confidence when looking for quality accommodation and where to have a decent meal.

All establishments listed in Exploring More Recommended have been personally visited and endorsed by members of our reporting team. They score highly for quality, comfort, ambience and value for money. 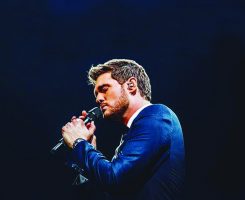 A Liverpool date with Michael Bublé – Grammy Award-winning global superstar, Michael Bublé is in the middle of one of his biggest ever world tours, taking in 108 shows across 22 countries and three continents.  He makes a welcome return to the UK in the run up to Christmas, with shows at the M&S Bank […]

Golf breaks in the Dordogne – Golfers can take advantage of the most affordable golf in Europe when staying at Souillac Golf & Country Club this spring and summer – with seven-night unlimited golf breaks available from just €175 per person. Souillac’s breathtaking location in France’s Dordogne Valley is matched by great value breaks  for […]